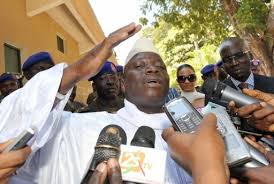 Just as many of Yahya Jammeh’s unplanned, hasty and imposed policies, his so-called monthly now bi-monthly set-settal (Cleansing exercise) has failed tremendously. Jammeh copied this idea from Nigeria, but in Nigeria the policy was democratically voted for by the houses of parliament and senate respectively, and it was well planned and thought through before it was adopted as a law. In Nigeria, the state and local governments do provide the cleaning materials, personnel and  logistics to collect the rubbish and dump them at the designated places.

However, in the Gambia, Yahya Jammeh took a unilateral decision to impose the monthly set-settal on the nation without consulting the people or their lawmakers. The decision was not planned or thought through so whenever there is set-settal it always has unintended consequences, because rubbish are dumped or gathered in various places without being collected for a very long time. Instead of the government providing the logistics and other materials needed for set-settal to the area councils, Jammeh just jumps and impose the policy on the people. Above all, he Jammeh has the guts to give away fleet of cars and cash to Senegalese wrestlers and entertainers while the country’s market places and city centres smell hazardously and are littered with uncollected rubbish which is primarily due to lack of trucks to collect the rubbish.

The current condition of uncollected rubbish in our market places and city centres has to change, otherwise the situation is not only embarrassing but dangerous to humans existing. The uncollected rubbish create toxic chemicals and hazardous smells as well as breeding places for mosquitoes that causes malaria, the number one killer disease in the Gambia. Also, because the marketplaces are the worst affected areas, the rubbish are a source of bacteria and parasites which could lead to diseases like cholera and diarrhoea epidemic outbreak in the country.

Jammeh should take politics out of this issue and address it as soon as possible because this is a very serious matter that could affect the entire country for a very long period. Gambia was fortunate not to be affected by Ebola virus outbreak, however, the country’s economy was directly affected due to drop in the number of tourists coming to the Gambia. To avoid a repeat of that, the Gambia government needs to take urgent actions to solve this national embarrassment and dangerous condition in the Gambia.