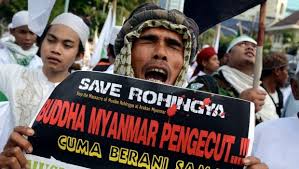 The Gambia government on Monday 18th May has offered to resettle the Royingya people of Myanmar to The Gambia. According to the press release  “The Government of The Gambia notes with great concern the inhumane condition of the Royingya people of Myanmar, especially those referred to as boat people currently drifting in the seas off the coast of Malaysia and Indonesia. As human beings, more so fellow Muslims, it is a sacred duty to help alleviate the untold hardship and sufferings these fellow human beings are confronted with. Therefore, The Gambia being a country with a predominantly Muslim population and with a natural culture of interfaith tolerance hereby expresses willingness to accept and resettle all boat people who wish to reside in The Gambia”.

However, Yahya Jammeh offering to shelter the Rohingya people is the proper characteristic of a hypocrite from human and Islamic points of view. From Janaury to May 2015 there are over 2000 Gambians who fled the Gambia for fear of persecution, torture, murder, jail and of course economic degradation. Some of those people do end up dead, jailed or tortured on their journeys and the Gambia government is doing nothing to stop that but only to offer to resettle other people. The Islam Jammeh is citing to justify his offered has said, charity starts at home, Jammeh needs to stop persecuting his own people first, then and there he can offer to resettle persecuted people and he will be taken seriously. You can’t have that number of people emigrating their country without a problem, since Jammeh had unlawfully come to power in 1994 up to date Gambians are constantly being killed, tortured, widowed, jailed, maimed, exiled and suppressed with impunity and yet still he Jammeh has the guts to offer resettlement for Royingyas on the basis of Islam and persecution. Although everyone knows Jammeh is an attention seeker, but for him to use other people’s desperation to earn international attention is so mean of him and is also showing the true characters of the dictatorship the people of the Gambia are going through.

According to the United Nations there are about 800,000 Rohingya in Myanmar that are considered to be among the most persecuted people in the world. However, this is also what is taking place in the Gambia on daily basis, since January this year a 14 Year old boy Yusupha Low was kidnapped and detained by Jammeh for alleged crimes of his father Bai Low and up to date the boy is nowhere to be seen. In April 2000, 16 students were murdered and 100s more maimed both physically and psychologically by Yahya Jammeh and still no justice for those victims. The former NIA director Daba Marenah and his co-accused were savagely murdered and still no justice, Imam Baba Leigh was tortured by Yahya Jammeh and later exiled just as Imam Bakawsu Fofana was and yet still no justice but Jammeh has the guts to make himself look like a saint in front of the world.

This is how Islam has defined a hypocrite, a person who does bad to his people and make himself appear as an angel to other people. Last week Jammeh went on to trade insults to the biggest tribe in The Gambia, the Mandinkas and Islam has forbidden tribal hatred, but yet still he thinks he has the mandate to use Islam as his basis for resettling the Rohingyas. What a joke Jammeh is. Jammeh you are no angel, but an opposite of an angel a DEVIL you are.