According to reliable sources on the ground, Nogoi Njie and Fatou Camara are alive, but they have been severely beaten the authorities are keeping them from public view in order to buy time for their recovery. However, our sources said they are yet to establish the whereabouts of the other people from the group of Solo Sandeng, Modou Ngum and Fatoumata Jawara but they promised to continue their search.

Meanwhile, today 28 April 2016 was another court appearance for Ousainou Darboe and Co. in the Gambia where the state has continued to derail the court proceedings just as they did in previous sittings. As usual, the defendants appeared in court amid heavy police escorts, but arm paramilitary officers are less visible today in the vicinity of the court. According to our sources on the ground, Ousainou and Co. also appeared in buoyant mood and in high spirits as some of the defendants could be seen smiling and waving at the public. 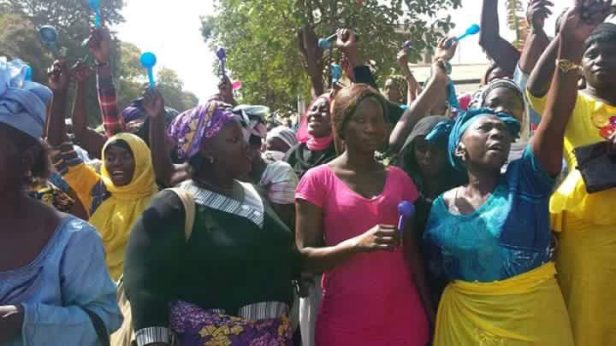 Today’s court appearance was as a result of the state request from yesterday’s proceedings for them to be able to add new names to the charge sheet. Mr S. Barkun the Director of Public Prosecution (DPP) informed the court yesterday 27 April 2016 that the state wants to add additional names to the charge sheet. The Lead counsel for the defendants, Mr Antouman Gaye urged the court to proceed with the case and the state can add the additional names later but the presiding  Justice O. Ottaba adjourned it to today. Meanwhile, the judge has also adjourned the case until Thursday 5th May 2016.

However, people are not waiting any longer as they continue to chant “We need Solo Sandeng, Dead and Alive” and marching along Kairaba Avenue towards the residence of Ousainou Darboe.

2 thoughts on “Breaking News: Nogoi Njie and Fatou Camara are said to be Alive but Wounded”