An international rescue fleet led by Italian coastguards has rescued over 5,900 people that are attempting to cross the Mediterranean sea from Libya to Europe during the weekend. According to the British Military of Defence, a British warship Bulwark has helped rescue over 1000 people including 10 pregnant women and children.

At the beginning of 2015, over 1400 Gambians were among the people who crossed the Mediterranean Sea to Europe and more than 2000 died trying to escape the brutal regime of Yahya Jammeh to cross to Europe. Jammeh’s rule has forced thousands of Gambians to flee the country as he crushed any dissent in the country and his continued failure to create economic growth in the country. Gambia has one of the highest unemployment rate in the world, especially among youths which also is a factor forcing people to flee the country. 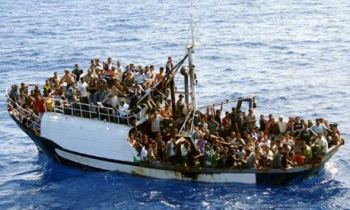 The EU is yet to come up with a concrete plan to tackle this human tragedy, however, they have increased their presence in the Mediterranean sea as this tragedy continues to besiege their shores. On June 16 the EU interior ministers are scheduled to meet to discuss a European Commission plan to distribute over 40,000 asylum seekers from Greece and Italy to other EU members. The Italian authorities want a change in a treaty that requires asylum seekers to ask for refuge in the country where they first enter the bloc.