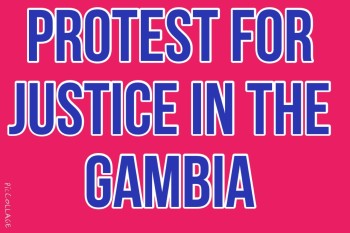 As the people of The Gambia continued to be repressed, falsely accused and jailed, tortured, maimed and killed by the brutal and repressive government of Yahya Jammeh which as a consequence, many people are forced to flee the country. Most of those who fled often ends fleeing to Senegal which used to be the save heaven for Gambian refugees, however, the Senegalese government of recent has turn its back on it’s moral and democratic duties in either deporting Gambian dissidents or allowing the infamous NIA agents to kidnap them from Senegal. This as a result, many Gambian refugees now resorted to dangerous journeys like traveling to Libya and eventually the Mediterranean Sea to try to travel to Europe either dead or alive.

This month 15 years ago, 16 students including a journalist and Red Cross volunteer were murdered by Yahya Jammeh in the Gambia and up to date no justice for the victims. These crimes and many other crimes committed by Yahya Jammeh need to be protested both in The Gambia and outside and that is why Gambians in the UK want to call on everyone to join them to protest and highlight the repressive and brutal conditions Gambians are living in.

Please lets join forces and put an end to this Yahya Jammeh’s dictatorial and brutal regime out of The Gambia as Gambian deserved better.